Deprecated: /home/lqlrqu6t330m/public_html/gassector.com/wp-content/plugins/wordpress-seo/src/deprecated/src/presenters/open-graph/fb-app-id-presenter.php is deprecated since version WPSEO 15.5 with no alternative available. in /home/lqlrqu6t330m/public_html/gassector.com/wp-includes/functions.php on line 5061
 Line 5: Ontarians, Michiganders want the oil to keep flowing in the contested pipeline; Quebecers are split - Angus Reid - Energy News for the Canadian Oil & Gas Industry | EnergyNow.ca - GASSECTOR.com
Skip to content

July 27, 2021 – Canada’s energy independence is in the spotlight again, with a key energy artery in the crosshairs of a transborder dispute.

Enbridge’s Line 5 pipeline, which supplies Ontario and Quebec, is under threat of closure from the governor of Michigan, where the pipeline runs through an environmentally sensitive waterway.

New data from the non-profit Angus Reid Institute finds half of respondents in Michigan (48%) and Ontario (49%) want the embattled pipeline to stay open, while a quarter in Michigan and nearly three-in-10 in Ontario want it shut down. In Quebec, the 72 per cent who have an opinion are split on what the pipeline’s fate should be.

The potential economic impacts, both regionally and personally, are a key concern for those who want the pipeline to stay open. A majority of the pipeline’s supporters in Michigan (65%), Ontario (65%), and Quebec (55%) believe they will be personally impacted either “significantly” or “massively” if Line 5 shuts down.

The dispute over Line 5 also appears to have revived support for a west-to-east Canadian pipeline. Three quarters of Ontarians (76%), and three-in-five Quebecers (58%), believe TransCanada’s long-since-cancelled Energy East project should be reconsidered if Michigan turns off the tap on Line 5. 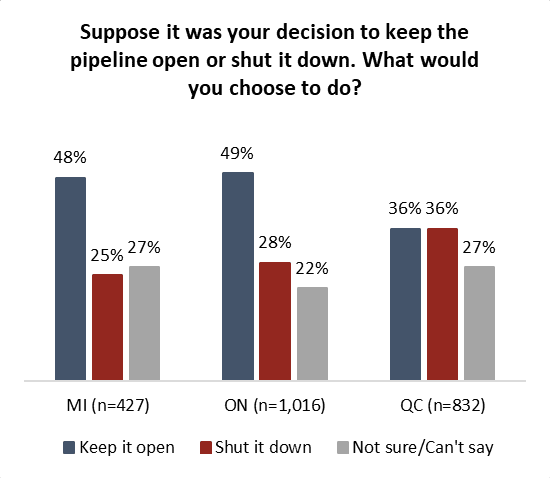 The Angus Reid Institute (ARI) was founded in October 2014 by pollster and sociologist, Dr. Angus Reid. ARI is a national, not-for-profit, non-partisan public opinion research foundation established to advance education by commissioning, conducting and disseminating to the public accessible and impartial statistical data, research and policy analysis on economics, political science, philanthropy, public administration, domestic and international affairs and other socio-economic issues of importance to Canada and its world.

Link to the poll here: www.angusreid.org/